Our 2020 vision: a new decade of service innovation alongside network investment

2020 will kick off a new decade of wireless service innovation and network investment in Canada, starting with the introduction of independent tiny telecoms. Thanks to innovative MVNOs, this will be the first time our country experiences real competition in the wireless market.

It’s a new year. We are done running our holiday errands. We have had some time for ourselves and our families. Now, we look back to the previous year (or perhaps, in this case, the last decade) and look forward to what lies ahead.

We do it in the form of resolutions, manifestations, gym memberships, or pinky swears. Whatever the form, what is planned ahead is usually a positive vision, an improvement, an evolution. In the business world, most evolutions now involve digital technologies and push beyond the traditional boundaries of physical assets and infrastructure.

It is symbolic that, as we enter the 20s, we were mentioned in this Toronto Star article discussing Canada’s wireless industry opportunity. In our vision of wireless in the digital world, service innovation is as important as what happens at the network level and we are eager to show you what is possible. 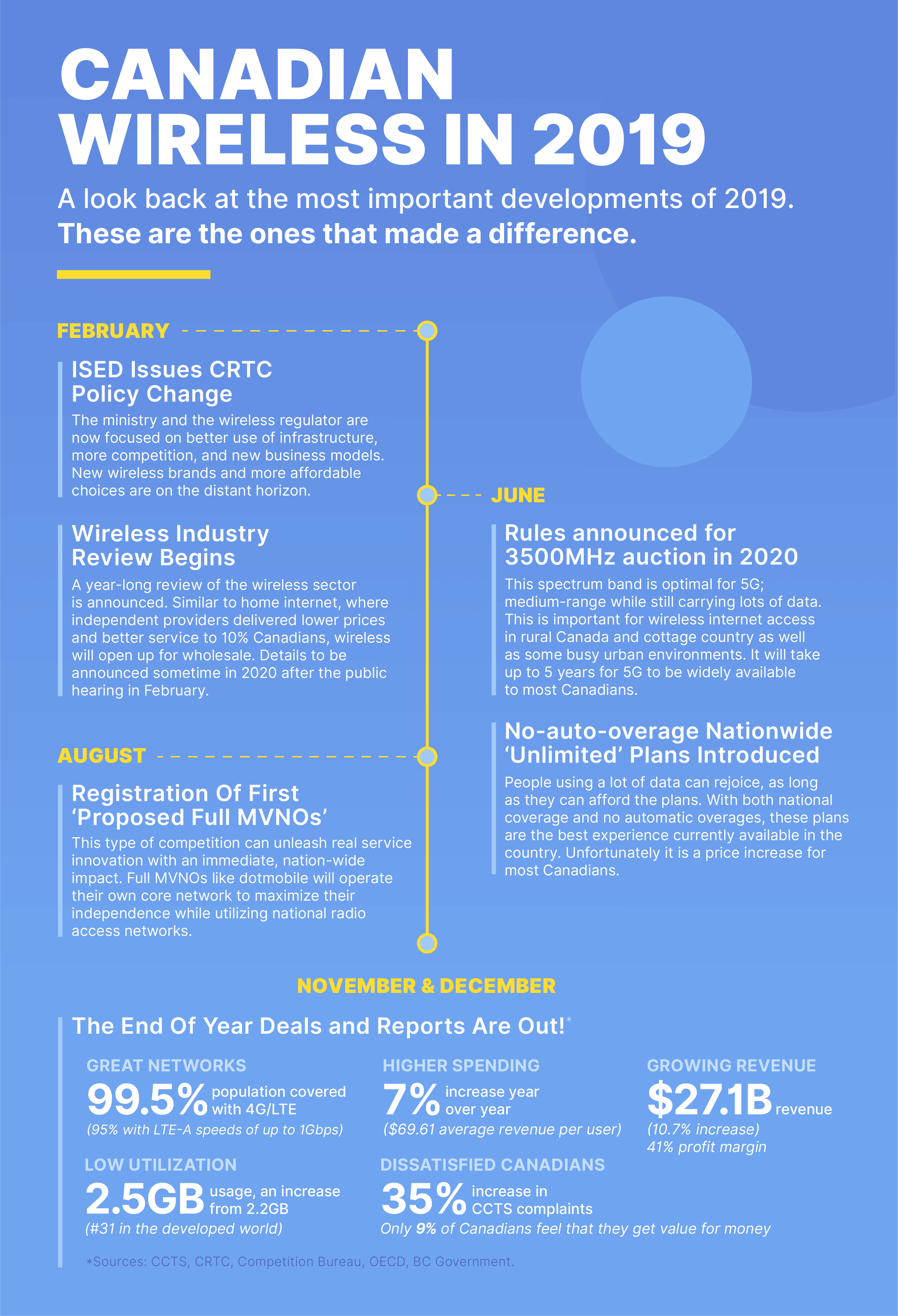 For us, the biggest event of the past year was the one-two punch of a new ISED (Innovation, Science and Economic Development Canada) directive to the CRTC (Canadian Radio-television and Telecommunications Commission) and the announcement of the CRTC’s full review of the wireless industry. We were determined to bring about change to the industry and the stars had aligned!

For everyone else, 2019 delivered improvements to mostly just the top tier of users. You could also argue the changes were driven by fear of impending regulation rather than competition or a desire to innovate, and that they are temporary. But we will save that for another time.

The most memorable wireless event of the year was the launch of ‘unlimited data’ plans which eliminated automatic and punitive overages for plans starting at $75. Credit is due where it is deserved, this was a positive change. The 512kbps throttle speed after you use all your data is generous. Before this, unlimited plans with throttling were mostly available from regional providers, with limitations like zones. These new plans are immediately available for 90% of Canadians and 15-20% are expected to switch to them. Hopefully more and more Canadians will be able to afford this top-end experience and more competition will change how the rest of the country experiences wireless.

The reports of lower prices are greatly exaggerated

At the end of 2019, you might have heard some voices of industry saying that plan prices are dropping in Canada. The obvious argument is that this doesn't account for overages - they make up about 5% of industry revenue, are mostly paid by low-end users, and increased by 40% multiple times prior to 2019.

More importantly, the price per unit of data is expected to decrease over time! We consume more, new network technologies deliver on promised spectrum efficiency and overall the cost per used megabyte or minute is lowered.

The average revenue per user in Canada is more indicative of our total expenditures on wireless service. It increased by 6.6% this year to $69.61. On top of that, we rank 31st of 37 nations in the developed world with an average of just 2.5GB of mobile data usage. Here is how the widening gap between affordable and high-end options in the US and Canada looks, using the wireless price comparison site WhistleOut.

2020 Hot Tip: Make sure to visit Planhub.ca and Whistleout.ca before you make any wireless plan related decision!

It is important to point out that the CRTC themselves caution that measured price changes do not reflect the actual amounts paid by consumers. The average cost to produce a megabyte is improving with the development of new network technologies. Moving from one generation to another (3G to 4G or 4G to 5G) should decrease costs by at least 1000% (cost ten times less). Prices need to go down by an average of 37% (CAGR -37%) each year if that is to be achieved within the next 5 years.

So are our networks underutilized?

Nearly everyone in Canada (99.5%) is covered by a 4G/LTE network, and 95% are covered by LTE-Advanced networks with speeds of up to 1Gbps. So why aren’t we using half the data that our neighbours in the United States use? If our networks are truly world-class, we should be aiming to topple at least one of the top-three (Finland, Austria, or Latvia) and unleash our pent up demand for more data.

At the same time, a large number of seniors, youth, newcomers, visitors and people on a budget are being pushed into service options that are not optimal for their needs. Two and a half gigabytes is more than enough data for many Canadians, and most travellers too.

Some will say that we just need to give the industry more time. Ten years ago the first “wireless disrupters” had entered the market and started building their own wireless networks. WIND Mobile, Public Mobile, and Mobilicity spent hundreds of millions of dollars on spectrum licenses and network infrastructure. They fought hard, but mostly against each other.

Now? Telus has purchased Public Mobile and migrated everyone to their network but kept the “3G” speeds. Rogers bought Mobilicity, absorbed their subscribers, and shuttered the doors for good.

WIND was left standing, the only one to survive a pricing war that was fought between the little guys. To keep growing, however, it was going to take another billion (or two) dollars. Two acquisitions and a rebranding later, Shaw purchased Freedom Mobile and began steering it towards a premium brand.

During all of this, the average revenue per user - essentially how much Canadians pay each month for wireless - continued to grow. Since 2014 it has increased by almost $10 a month.

What’s more, after all this time and all this money, many Canadians will never get a chance to try out one of these new entrants. These “disruptors” can only do their thing where they build a network. It’s expensive, slow, and for now, relegated to only our biggest cities. While they build, prices go up. While we wait, we pay.

This whole time Videotron stayed on the sidelines - a Quebec-based new entrant that avoided the new entrant wars and secured a network sharing deal with Rogers. They’ve stuck to their province and even launched Fizz, a digital-only sub-brand.

Videotron serves as a good example of using existing networks and pushing forward with service innovation. Ten years later, all of Canada should be as lucky as Quebec, but even with billions of dollars invested many of us are still waiting.

Betting on service innovation (MVNOs) as well as network innovation is a good idea. It also happens to be a more sensible path to the digital revolution promised by 5G, which is about more than connectivity/speed and where everyone is a part of it. We are all stakeholders!

If building great nationally available networks was the last decade’s accomplishment, what boost can we expect from the decade of service innovation? Can it deliver improvements for underserved users everywhere in Canada? Can it create additional value and efficiently use national networks? What exactly the types of innovative services can we expect at the start of the decade?

A few new takes on wireless service, like the digital-only brand Fizz, were already available last year. In 2020 we expect more companies to innovate, some with national networks behind them, some using regional networks.

Large segments of Canada are forced into service offerings that don't meet their needs, and it's about time that smaller companies created purpose-built products for them.

In 2020 we will see companies differentiate by focusing on specific needs without the sacrifices we have all become accustomed to. Putting greater importance on affordability, service innovation and using digital technologies to improve wireless service and connectivity. 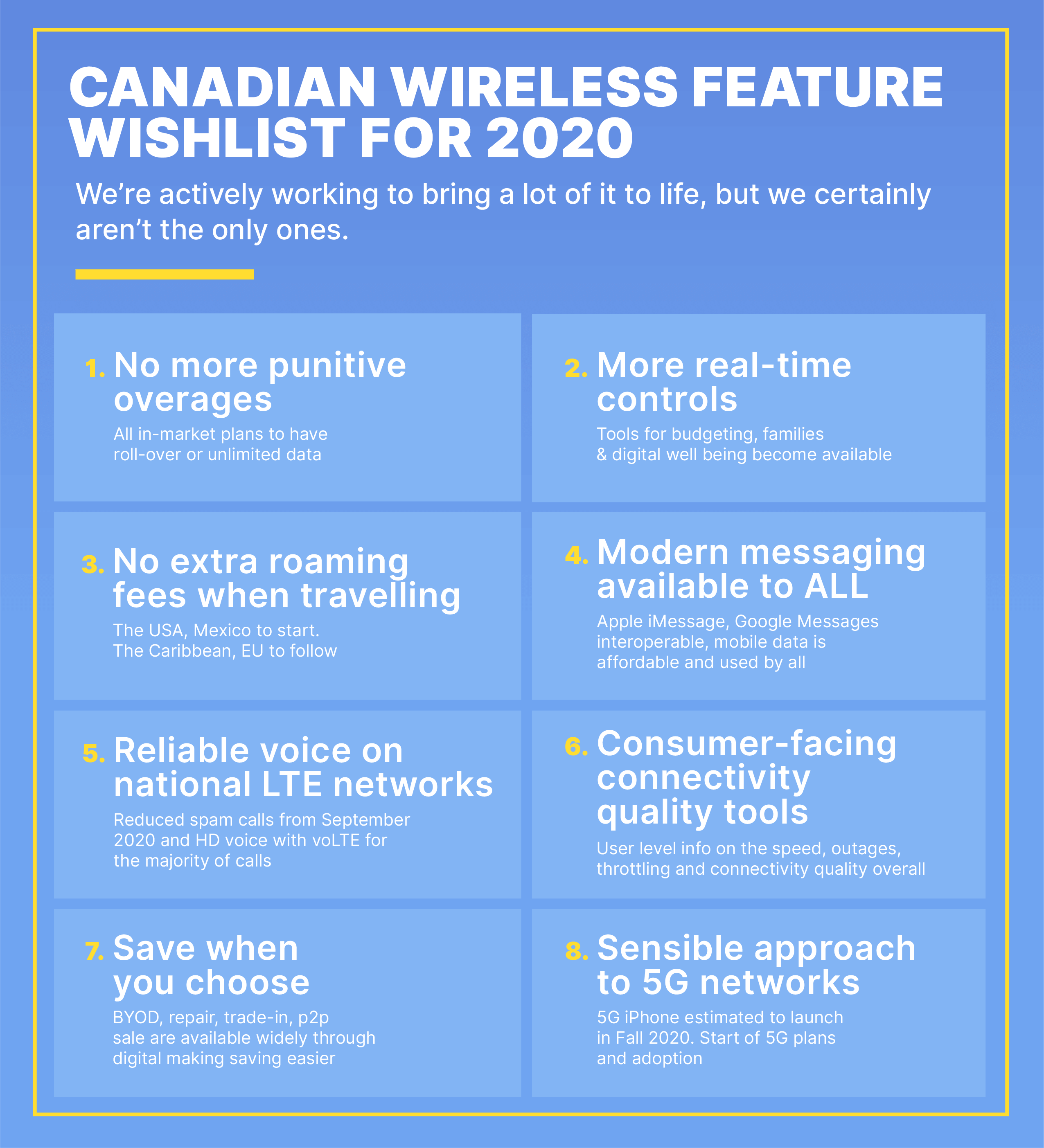